Has anyone ever told you that you make strange noises in your sleep? Perhaps your partner intentionally wakes you up because the noise is disturbing them, and a conversation along these lines ensues:

“You know, that weird groaning sound that goes on for ages. I can’t sleep when you do that!”

It would need a medical diagnosis to be completely sure, but if this sounds familiar, it could be that you have catathrenia.

Sometimes known as nocturnal groaning, catathrenia falls under the category of sleep-related breathing disorders in the third edition of the International Classification of Sleep Disorders (ICSD-3).

During an episode of catathrenia, people will typically inhale deeply while sleeping and then hold their breath for a short while. When they exhale, they might make a groaning, moaning, or shrieking noise.

The noise emitted was found in a study to last between two and 50 seconds on average. At the end of the groan, the person might make a secondary noise like snorting, and it’s possible that they wake themselves up too.

Research has shown that catathrenia usually occurs during the Rapid Eye Movement (REM) stage of sleep during the second part of the night, but can occur in other sleep stages too.

Some researchers further suggest there could be sub-types of catathrenia, for example depending on whether the noise made on each exhale is short or long.

Catathrenia is thought to be relatively rare. So much so, that researchers in the USA suggested that many otolaryngologists and sleep specialists are unfamiliar with it.

The researchers also discussed two interesting studies that demonstrate how uncommon it is. In the first, just 25 of 15,052 patients (0.17%) who went to a sleep center in Japan during a 10 year period had catathrenia. And in the second, 4 of 1,004 patients (0.4%) who underwent a sleep study in Norway had it.

Benign, but sometimes a nuisance or embarrassing

The noise made can be very loud, and for some people can sound sexual in nature. This can be disturbing or annoying for other people in the household who hear it, and embarrassing for the person making the noise when they are told what they were doing in their sleep.

People with catathrenia may experience it for many years, and research suggests that some may have regular episodes during that time. Unless their partner can sleep through the noise, it can become a source of frustration for both people.

In the hundreds of comments below this article that people have written since it was first published, there are many stories of coping with the embarrassment or stress of the noise.

Other than being a ‘social nuisance’, sleep researchers consider catathrenia to be a benign condition that doesn’t cause any other negative effects. Some people report feeling sleepy or tired during the daytime, but it’s not clear if that’s a direct result of their catathrenia.

As it’s not a very common sleep disorder, catathrenia is sometimes confused with other sleep disorders or health issues. So it’s important to understand that it isn’t any of the following:

When forming a diagnosis, a medical professional would want to rule out the above possibilities, particularly serious conditions like apnea and epilepsy.

The exact cause of catathrenia is still unknown. Unfortunately, there just hasn’t been as much research on catathrenia as many other sleep disorders, especially those that are thought to have more serious consequences if unmanaged.

The American Sleep Association discusses studies showing that there’s a similarity in the jaw sizes of people who have it – they all apparently have small jaws. They also say that 14% of patients have been found to have a family history of it, so there may be a genetic component. And 43% in one study had a history of parasomnias, such as sleep talking in childhood.

Despite the lack of understanding as to what causes catathrenia, it’s interesting that a treatment that has been found to help in some studies (see below) is a CPAP machine, which is also used for sleep apnea.

Many people don’t even realize they make the noise until a partner or someone sleeping in their house tells them.

Talking with a medical professional or having a sleep study conducted is the best way to make sure catathrenia is identified correctly.

You may be diagnosed purely from your history and reported symptoms, or you might be asked to have an overnight sleep study in a sleep center.

Following this there are two main ways to approach the treatment:

Currently, there isn’t a clear treatment that’s thought to work for all patients with catathrenia, and no medication that’s been proven to work. Interestingly, however, the researchers in 2017 made some recommendations for possible future treatment research avenues.

In surveys they included in their study, the most common comorbid medical conditions were anxiety and depression, which perhaps explain why those techniques could be helpful. So if this applies to you, perhaps it’s worth trying self-help, or reaching out for professional help if you haven’t already.

Their data also suggests that alcohol use, smoking, and recreational drug use could be factors to consider. Perhaps you could experiment with reducing or quitting these substances, if it applies to you, to see if that helps.

They also suggested that swimming could be a factor as 9 out of 47 (19.2%) participants were regular swimmers. If you’re a swimmer, perhaps keep an eye on whether your catathrenia symptoms are worse on days you’ve been in the water.

Successful treatment with a CPAP machine

Researchers at Stanford University found in a study of seven patients that a Continuous Positive Airways Pressure (CPAP) machine helped resolve the nocturnal groaning for all of them.

A CPAP machine delivers air gently through the nose to keep the airways open and is regularly used by people who have apnea.

In that study, five people also chose to have surgery later on. Four of the seven people attended a follow-up with the researchers, and three of them had decided to have an oral device fitted to help them in that time as well. All four reported that they no longer had catathrenia symptoms.

In 2020, researchers in Peking gave CPAP treatment to 49 people with catathrenia. They concluded that it’s an effective treatment, though did add that it couldn’t be eliminated completely.

In 2020, researchers published a case study of a patient with catathrenia who was successfully treated with the lowest CPAP pressure settings.

The researchers explained that CPAP machines are known to be problematic for some people as they simply don’t like wearing them in bed. They suggest that perhaps only needing the lowest setting might make it easier for people to continue using.

They say in their study:

…catathrenia is an uncommon disorder characterized by a distinct breathing pattern in which CPAP treatment seems to be effective but its utility is limited by poor patients acceptability. Setting CPAP pressures to control cathatrenia events (leaving aside flow limitation) could be related to better CPAP compliance.

It seems then that using a CPAP machine is currently the most successful treatment offered. However, not everyone finds them comfortable enough to wear in the long term.

Another option for couples that might be worth exploring until a solution is found is for the partner who is disturbed by the noise to try and block out the sound. Wearing earplugs could help in some circumstances, though possibly not reduce the sound completely if it’s very loud.

It might help if you’re hearing it from another bedroom in the same house, but perhaps not if you’re right next to the person making the groaning noises.

Another option is to use headphones and listen to music or white noise if you enjoy that. Good noise-cancelling headphones might add an extra boost to the sound masking too.

Ultimately though, blocking the noise won’t help the person who has catathrenia, other than giving them some peace of mind in knowing that their partner can sleep through it. Seeking a professional medical diagnosis and treatment is always going to be the best option in the long run.

Several readers have commented that raising their pillows helps stop the groaning sounds. I haven’t seen this published as a recommended treatment, but it’s interesting that readers think it helps and might be worth trying as a quick self-help technique.

Some have also offered the suggestion of avoiding sleeping on your back. Again, this doesn’t have research to back it up, but it’s an easy and free method to try – it also helps some people with snoring.

There have also been suggestions that it’s worse with stress and sleep deprivation. So try to stay on top of both your daily stress levels and make sure you get enough sleep.

I’d be very grateful if you could leave a comment to say if these ideas work for you, if you decide to try them or already have done. That way I can write in more detail about how often it helps people.

And if you have any other suggestions for coping mechanisms that might benefit other readers, please feel free to leave a comment below. 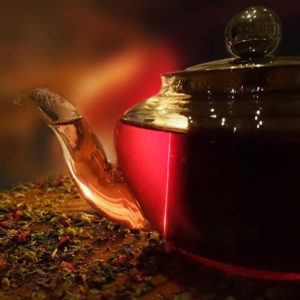 The Best Teas For Sleep And Relaxation 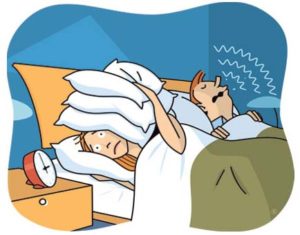 How To Block Out Noise In Bed 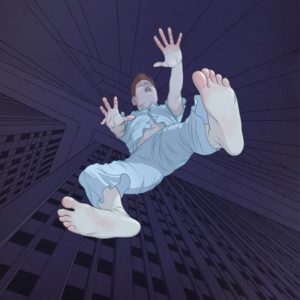 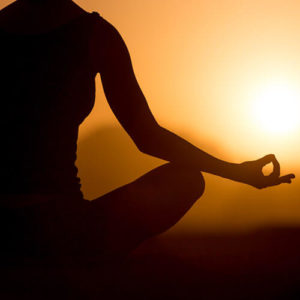