If you spend much time with British people, you’ll soon discover that the first step in dealing with many of life’s problems is to put the kettle on. When I’m abroad, it amazes me how often people ask if 4 p.m. is tea time though.

When I politely inform them that many Brits drink tea from morning to night and at random times, this insight is sometimes met with disappointment. Faith is restored, however, when I admit that we usually have a variety of biscuits in the cupboard.

As well as making daily life seem more bearable and enjoyable, can drinking certain teas help us sleep though? Or is insomnia one problem that can’t be tackled with tea and a cheeky biscuit?

Can tea really help you sleep?

I don’t want to sound negative, but when you trim away the urban myths, popular wisdom, and marketing hype, the scientific evidence that tea can help with sleep is a bit sparse.

The good news is that there is some evidence that ingredients like chamomile, lavender and valerian might have some sedative properties. However, researchers often use larger dosages in supplements than you’d typically get from a cup of tea.

On a more positive note, my personal opinion is that taking the time out to prepare and enjoy a nice cup of tea is in itself rewarding. It’s the perfect excuse to have some valuable ‘me time’.

Whether the ingredients are working their magic behind the scenes and the effect just hasn’t been proven by researchers or it’s the placebo effect is irrelevant to me. If I feel it helps me drop down a mental gear and wash away my stress at the end of a hectic day, I’ll keep on drinking it.

“Tea brings time to a crawl, its frantic pace resuming on noticing our empty cups.”

Let’s first take a quick look at some of the most common ingredients that people and companies use when concocting teas specifically for relaxation.

I’ll then run through teas you can easily find in stores and online that I personally like. Finally, I’ll list the suggestions that previous readers have made in the comments.

Chamomile is one of the global superstars of teas used for sleep and relaxation in general.

It’s found in many brands of herbal tea, either alone or mixed with other plants. And if you enjoy the process of making tea from scratch, it’s relatively easy to make.

Since this isn’t a recipe blog, I can recommend an article on food.com instead as they have clear instructions for making your own chamomile tea from fresh flowers.

As for evidence that it works as a sedative, I’ve seen more studies suggesting that it helps with anxiety than insomnia. But it crops up time and time again in bedtime teas and herbal remedies.

Studies involving chamomile in tea form are very limited. One study in 2016 found the tea helped postpartum women sleep better. However, after four weeks there was no difference between those and a control group who didn’t drink the tea. So they suggested that “the positive effects of chamomile tea were limited to the immediate term.”

Valerian tea is made from the root or leaves of the plant, and people have used it for centuries to help with sleep and anxiety. It’s thought that some people may need to take valerian for a couple of weeks before the full sedative effect is felt.

It’s one of the few plants which have been shown by researchers to have sedative properties. However, a detailed review in 2018 of previous clinical trials found that the overall picture was one of inconclusive results.

Other researchers suggest it may work, but the problem is one of the clinical trials not being well designed. And I haven’t found any research studies that used valerian tea specifically – they tend to be in larger dose supplement form.

Hands up if the word ‘inconclusive’ frustrates you too!

Although chamomile and valerian reign supreme in how frequently manufacturers put them in teas and over the counter sleep aids, they aren’t the only ones.

Another plant sometimes put into the mix is lavender, which is thought to have relaxing and anti-stress properties.

Again though, the evidence for its usefulness for sleep is limited, and I haven’t seen any for it in tea form. One review of eight studies using aroma inhalation suggested that it may provide a small to moderate benefit, but that more research is needed.

Lemon balm is traditionally believed to help with anxiety, stress and insomnia. And it’s often included in brands of teas created to promote better sleep.

One study had some positive results when using a concentrated extract. But again, it wasn’t in tea form so the same effect can’t be guaranteed if you drink it – especially if it’s just a small contributor to a tea mix using several ingredients.

Peppermint is often associated with providing energy and helping with stomach problems, but it’s also sometimes included in sleep teas.

Despite a lack of research using mint tea, research has shown that peppermint oil can help with indigestion and some other stomach complaints, and work as a muscle relaxant.

Perhaps it’s a good choice if you’ve eaten a little too much and indigestion is keeping you awake. And if it’s a headache that’s stopping you from sleeping, trying rubbing a little peppermint oil on your skin instead.

As a lifelong mint lover, any tea containing peppermint will always grab my attention. And it’s an easy one to make yourself – just grab a few fresh leaves from your nearest mint plant (they grow very easily) and steep them in freshly boiled water.

Native to Asia, but now cultivated around the world, you might associate lemongrass more with food than tea – it’s a favorite of mine when making Thai curry!

But researchers have discovered that it’s also used in some countries for a range of medicinal purposes, such as an anti-bacterial, antidiarrheal, anti-fungal, anti-inflammatory, antimalarial, and as a sedative.

The only research study I could find that used tea specifically was done with mice, not humans. However, they did find that Lemongrass essential oil had a positive effect on overall sleep time.

The passionflower is stunning when in bloom, alien almost with its complex design. But does is its natural beauty contagious, helping you get some beauty sleep?

This is one that does have some research using it in tea form. 41 participants were given either passionflower tea or a placebo tea. And the researchers found that those drinking the real tea had ‘short-term subjective sleep benefits’.

Ahh, it’s nice to end this section on a positive note.

“Honestly, if you’re given the choice between Armageddon or tea, you don’t say ‘what kind of tea?’”

Here are some of my favorite teas that you can easily find in many stores and online. The manufacturers do sometimes change the ingredients, so double-check if you like the sound of one I’ve listed below.

By the way, if you buy one via my links below, I might make a small commission, which will put tea on my bedside table. Of course, you can ignore my links and just go pick up a box from your local supermarket.

Celestial Seasonings Sleepytime tea is one of the most popular brands of tea for sleep in the United States. It’s also growing in popularity in many other countries around the globe.

It’s been my personal favorite for some time now. I find it has a delicious taste – soft and rounded even though it’s quite earthy. And with a little honey, it’s a lovely tea that helps me unwind at the end of a busy day.

It also has the added benefit of being soothing on the tummy. So if you’ve overindulged, this is the tea to calm both your body and mind.

I find it’s a very relaxing tea, and enjoy the deep, earthy flavor it has. You can really taste the rich combination of different ingredients, especially if you let it brew a little longer. It’s made with certified non-GMO organic ingredients.

Clipper Sleep Easy is a tea that’s close to my heart, being blended in the UK, not far from where I grew up. I like how they point out that it’s made with ‘organic ingredients and a clear conscience’.

Clipper says they strive to improve the welfare of the workers in the countries the ingredients come from.

The tea has quite a mellow flavor, with just a hint of cinnamon and the rooibos coming through the standard flavor of chamomile.

It’s a wonderful tea to drink before bed, with a unique taste, and one of my favorites in the colder winter months.

Pukka Night Time has a flavor that appears similar to the Celestial Seasonings at first. But there are some subtle differences – it’s a little stronger tasting, and sweeter even.

It’s a lovely flavor in fact, and I can happily drink more than one cup in an evening.

The ingredients are 100% organic and ethically sourced. Interestingly, it’s the only commercial tea I’ve seen with green rama tulsi leaf. This is thought to have anti-stress properties and is widely used in India.

Bigelow Sweet Dreams has some extra minty pizzazz to accompany the usual chamomile that you’ll find in most nighttime teas. It’s another of my favorites as I adore the taste and smell of mint.

Two different mint plants fuse together to create a special aroma, with a rich taste that’s great to drink on an evening when you feel like a stronger tasting bedtime tea.

Made in the US from non-GMO ingredients, the box, teabag, and string are all biodegradable. But if you live in a place with high humidity or damp, each teabag has its own foil pouch to protect it from moisture and air.

For a long time, the standard advice has been to avoid caffeinated drinks in the lead up to bedtime. However, in August 2019, some new research suggested that caffeine might not be such a fearsome sleep slayer after all.

Looking at the sleep patterns of 785 African Americans, the researchers found that alcohol and nicotine within 4 hours of going to bed both negatively affected sleep. In contrast, caffeine had no significant effect on sleep duration, sleep efficiency or time of first waking after falling asleep.

The researchers point out that they didn’t look closely at dosage, tolerance, and sensitivity to caffeine. So this research doesn’t let all black tea and coffee addicts off the hook; you’ll still need to experiment to see if black or green tea, or even coffee, is a feasible bedtime drink for you personally.

On the subject of black tea, when I’ve had enough of the herbal teas, my other favorite is decaffeinated Earl Grey. I hated it when I was a kid and always thought the name was a bit posh and the color too milky.

It turns out I was wrong though, as Earl Grey has the perfect softness to sip in bed while reading a book (yes, we Brits really do take our mugs of tea to bed).

“Tea to the English is really a picnic indoors.”

In the six years since I first wrote this article, many readers have shared their favorite nighttime teas in the comments.

With so many great suggestions, I’ve compiled the list below. How many of them have you tried already? If it’s more than half, I’ll be impressed!

Which tea do you drink to help you relax as the sun sets and the moon rises? Do you buy it or make it yourself? let me know in the comments below. 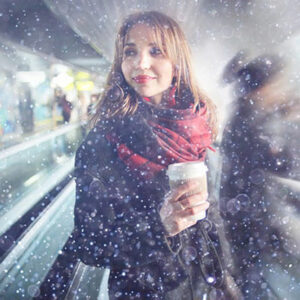 False Awakening: Dreaming About Waking Up 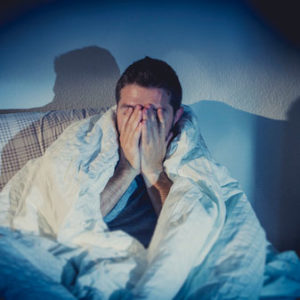 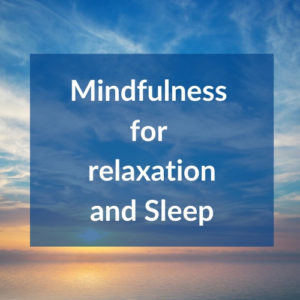 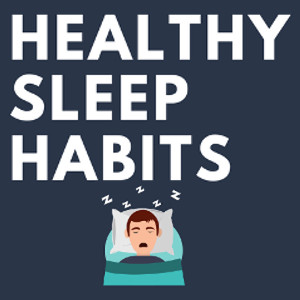